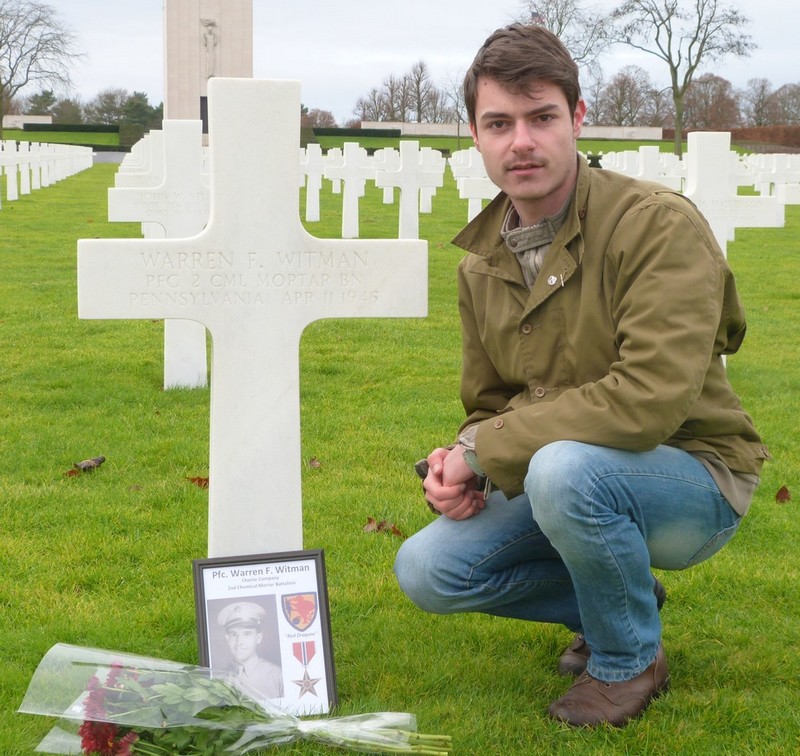 At the beginning of 2013, the niece of a 2nd Chemical Battalion soldier contacted me, seeing that I was interested in her uncle’s outfit and that I live in France and told me that her great uncle died on the 11th April 1945 and is buried in the cemetery of Saint-Avold. I tell him that I go there at least once a year. I also promise that I will go to bloom her grave, she sent me a picture of her great uncle; Warren Witman. One of the most important things to me and put a face on crosses, and names on faces.

My name is Loïc Jankowiak, I am 25 years old and I am graphic designer (see ljankowiak.fr)

I am not like some saying they are interested in history since they are kid. I had to discover the World War Two when I was 12 and I began to be fascinated by its history.

In 2009, and since the first commemorations of the landing of Provence in which I participated, I really began to take an interest in what was called “Airborne in Provence” but also by the liberation of the area by the American troops. Since that year and living myself in Provence, I quickly tightened the vice on what I should be interested in, and I concentrated on the First Airborne Task Force and this has been the center of my research for a few years now. I am writing a book about the creation of this unit until its dissolution by the way. My project is also to collect all the photos of the men of the units I am interested in and who were killed during the war. Why? Because most of the units I am interested in have been forgotten and few are researching the men who have been killed.

At the beginning of my research, I wanted to contact veterans through the internet and by mail. At first I received no answer, but this did not discourage me. A few years later I received a reply from Mike Reuter and John Devanie both of the 509th Parachute Infantry, and many others who told me “their war.” Some veterans who remained in the shadows for over 65 years were surprised to get recognition only today. 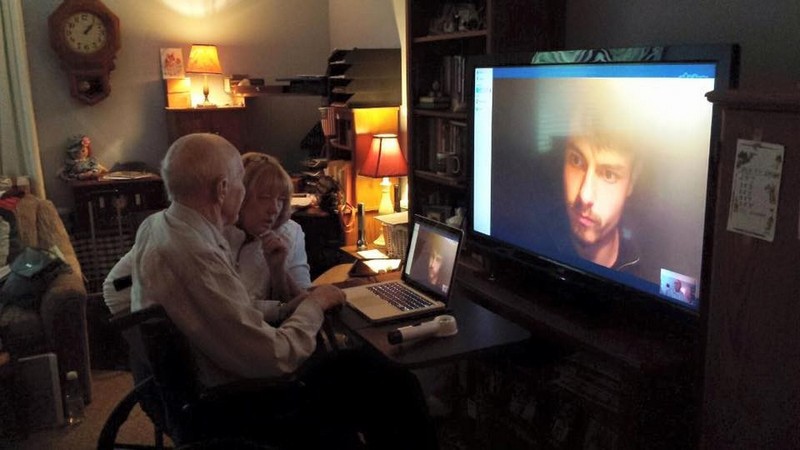 Skype conference in March 2016 with veteran Robert Amerlan of the 517th Regimental Headquarters who jumped near Callian on August 15, 1944.

Internet has appeared to me as a rich interface to learn, transmit and share. That is why I had the idea in 2013 to create a website to share what I learned in the fighting areas and books, but above all, to pay tribute to paratrooper veterans of the “Forgotten Dday.” It was from that year that I started to put on line the first pages of the site. It was in March 2013 that the site ‘First Airborne Task Force: the Forgotten Paratroopers’ was born where more than 550 pages were online.

It is in the spring of 2016 that the second version of the site is online, not being called ‘First Airborne Task Force: …’ but ‘Operation Dragoon and the Champagne Campaign’, still trying to deal with the Airborne invasion of Southern France, but also speaking in a second time of the US Army in the liberation of Southern France. A blog also appeared, dealing with subjects about the units that fought in the Mediterranean but also before, during and after the landing of Provence. I have always wanted to know as much as possible about my country as one knows about Normandy and how this little-known campaign was conducted and how one or another town was freed.

Many of the units dealt with on the website were shunned in favor of other units, probably “more interesting” or more “lucrative” within this community of “passionate” of the World War Two. These veterans who fought for the most part on the ‘forgotten front’ deserve as much recognition and gratitude for their contribution to the liberation of Europe. For even if the liberation of Provence was calmer and less mediatized than other fronts, it must not be forgotten that they were themselves before this campaign, veterans of the North Africa campaign or else, Italy and that each of them already had a story to tell, well before most of those who fought in Normandy. That is why I am looking for contacts with veterans who are witnesses of this campaign, in order to try to save small pieces of history as long as it is still possible. 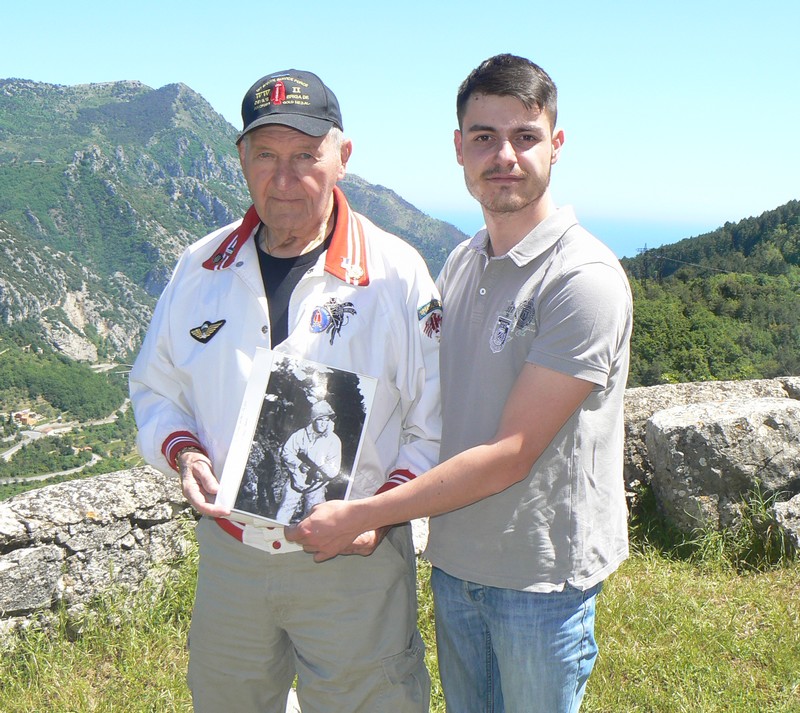 At the beginning of 2016, Cy Mermelstein, whom I know since 2014 and with whom I communicate often sends me an email telling me that he will be present at the First Special Service Force Tour in the south of France and wonder if I can take him to a fort where he was present on the French-Italian border before the beginning of the tour. This photo was taken on the north slope of Fort Castillon. The photo he holds in his hands was taken on the Monte Grammondo in the autumn of 1944, has a mountain just behind us.

For the last 7 years I have been doing dedicated research to the World War 2 history of the American troops in the Mediterranean Theater of Operations. In order to get a good archive of information, I have been investing a lot of money. Requesting documents through various archives, tracking down and buying hard to find publications, Then there are the costs of papers I print, postage for information packages or letters I am mailing out, and the hosting of this website. You can imagine that all of these things add up to a large amount that I am investing every month, all voluntarily.

Through this page I would like to ask for a donation to support my research projects. All the money that is donated here, will go straight into this research again.

The purpose of doing this research is not making money, but making sure that the men, the actions and the stories of these American soldiers in World War 2 will never be forgotten. These stories need to be preserved and shared with the world.

To make a donation, please use the below button.