Cime de Ventabren or Hill 1098 on the maps is located east of the Col de Braus (1002 meters above sea level) in the Maritime Alps. It is one of the objectives of the 517th Parachute Regimental Combat Team in its objective of conquering the Col de Braus, leading to Sospel. 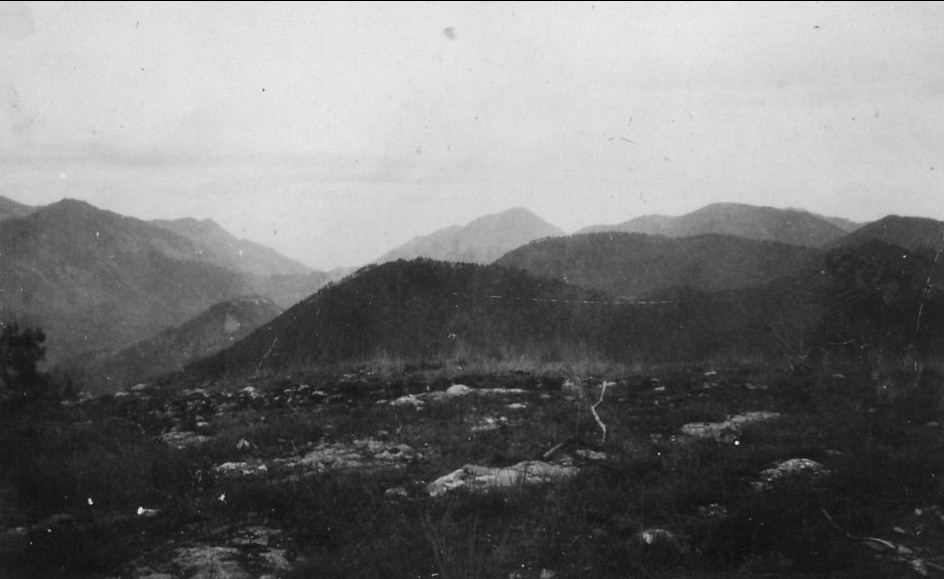 In early September 1944, the 1st Special Service Force entered the village of l’Escarène and sent strong patrols to the Col de Braus. Motley troops from I./Res.Gren.Btl.28 and II./Res.Gren.Btl.28 of the 148. Reserve-Division hold the pass, and in particular the Tête de la Lavina. Prisoners are taken, allowing the enemy units to be identified.

Between September 3 and 4, the 1st Special Service Force changed sectors and took care of the entire coastal area from Pont St. Louis to Mont Meras. The Col de Braus sector is therefore assigned to the 517th PIR, which arrived at l’Escarène at the same time as the 1SSF. However, since the 1SSF patrols and its departure from the Col de Braus area, little or no activity has taken place there. The German command – very busy with the coastal area to the Castillon region – noticed this and decided to send troops there to reoccupy the pass. It is mainly II./Res.Gren.Btl.28.

Cime de Ventabren – Hill 1098 – was also reoccupied, although the Allied headquarters seemed to have blocked it until September 8. It was on this date that the 517th finally moved forward after being blocked in the hairpin bends of the Col de Braus. 1st Lt. John Lissnner’ F Company arrives on September 10 on Hill 1040 and also invests the Pas de l’Agréé area.

On September 12, 1944, the first assault by Company F was launched. In the evening, it is pushed back by a strong counter-attack. While this mound was held for several days by troops from II./Res.Gren.Btl.28, II./Res.Gren.Btl.80 of the 34. Infanterie-Division arrived quite recently in the area. These fresh troops make it possible to repel the assailant and thus preserve this observatory. Within days, propaganda seized on this feat of arms and just as Rommel would have said for Normandy, “Who controls Hill 112, controls Normandy”, this quote is hijacked by : “Who controls Hill 1098, controls Sospel”.

Indeed, the Cime de Ventabren is a particularly strategic 360° observation point overlooking in particular Sospel, the forts of the Maginot line and certain accesses to the Franco-Italian border.

On September 13, 1944, F Company launched its second attack on Hill 1098. The very brief report of the attack records: “September 13: A patrol attacked and held the objective twice during the day. Due to heavy opposition from small arms fire, the patrol fell back to defend Objective #1 [Hill 1040]. A man killed. Five men injured. The man killed is Sgt. Arnold Ridout.

Company F attacked again two days in a row on September 14 and 15 and was repulsed twice. On the American side, the hill is nicknamed ‘Lissner’s Folly’ in honor of the commander of the fearsome Fox Company.

On September 16 and 17, no assault was launched in anticipation of the attack of September 18, which was to put an end to German resistance in the Col de Braus sector.

On September 18, the last assault on Hill 1098 was launched. The hill was taken with relative ease, as was the Tête de la Lavina, bludgeoned by naval artillery fire located offshore and the artillery of the 1st Airborne Task Force. 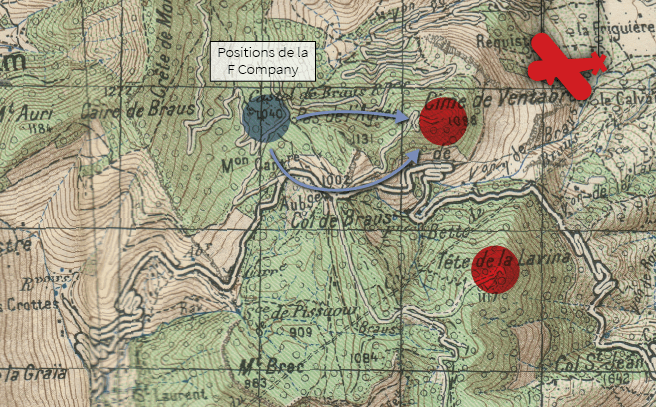 On September 19, 1944, after probing the defenses on the hill, the Germans launched a desperate assault to retake the Cime de Ventabren and the Tête de la Lavina, without success.

Five killed and dozens of wounded are recorded within the F Company. This hill will remain in memory of all the veterans who participated in the fight in the Col de Braus sector.