ALL AMERICAN GLIDERS AND GUNNERS IN MEDITERRANEAN

ALL AMERICAN GLIDERS AND GUNNERS IN MEDITERRANEAN 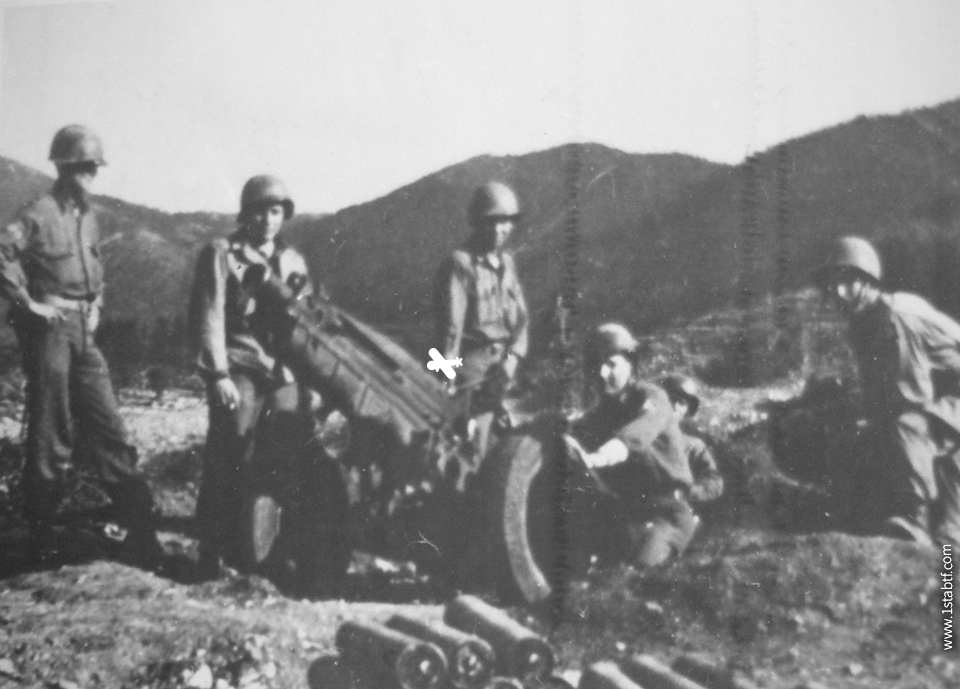 Glider units are a component of the less known and often shunned Airborne Army, unlike airborne units. The first units of Gliders seeing the fight are those of the 82nd in Italy, in Salerno. They did not arrive by air but by sea. But two other units of the 82nd, the 376th and 456th PFAB, were paratroopers armed with Pack Howitzer of 75mm and who had already sailed to Sicily in July 1943. With this gallery of 13 photos, we hope to pay tribute to them. 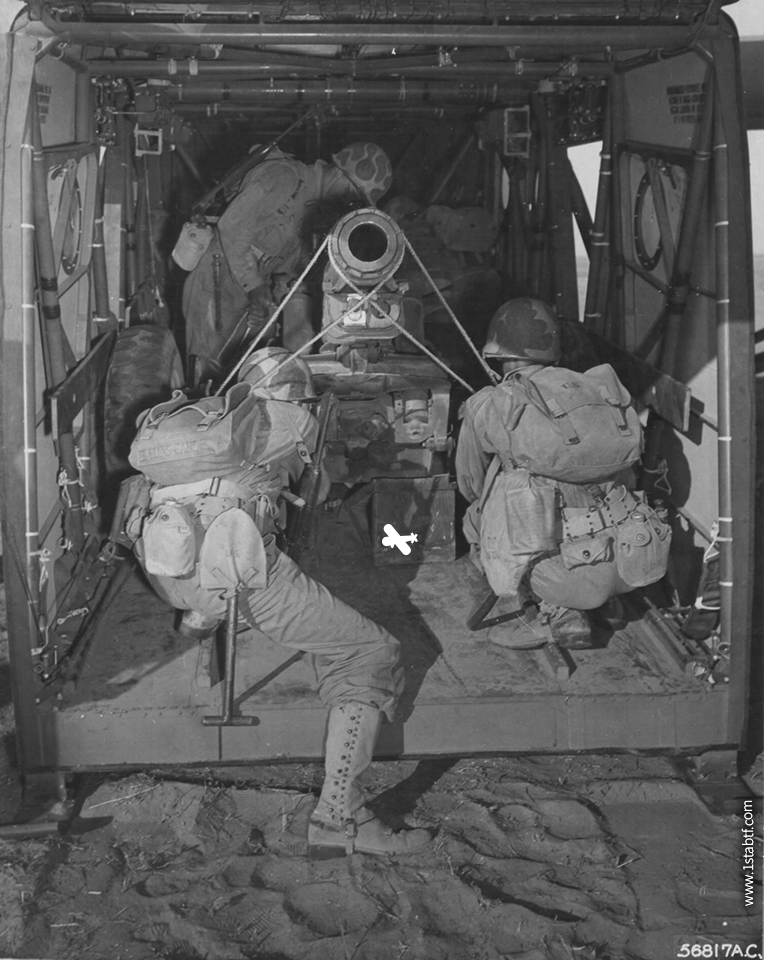 During the hot summer month of 43, the men of 319th GFAB charge and discharge the few gliders available to prepare with the first airborne invasion in Sicily. July 9, 1943 because of the lack of glider of ready combat and trained pilot, the fly was aborded. (National archives) 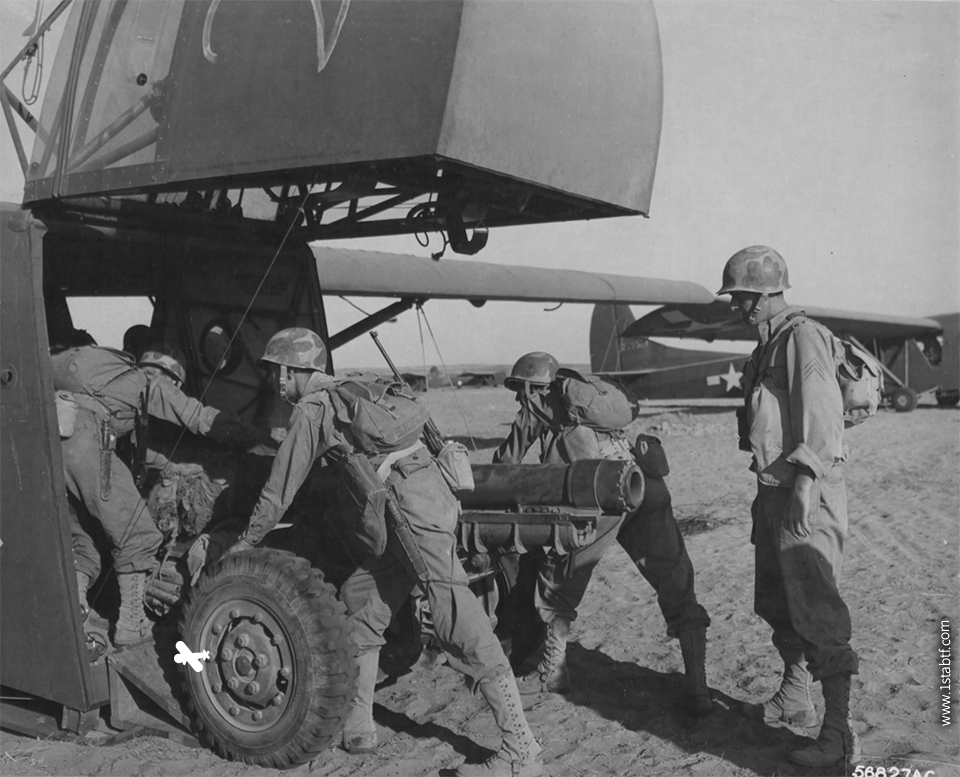 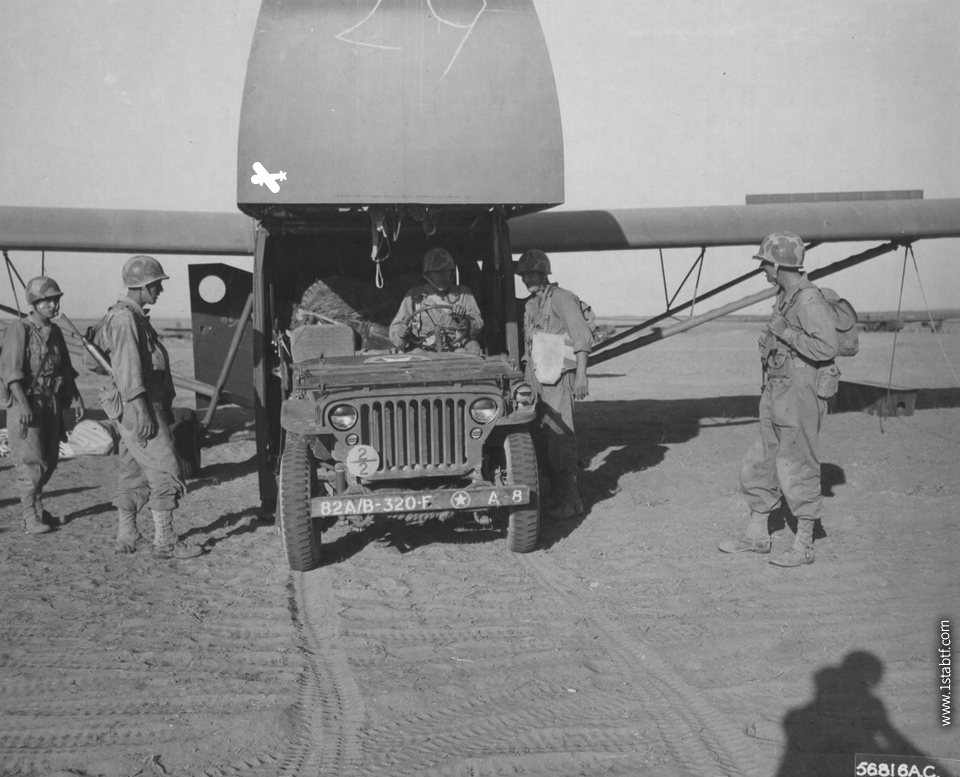 Training of the 320th GFAB to load a jeep inside a glider in North Africa in Spring 1943. The camouflage of the helmet of this unit is very interesting. It looks like to a "Mickey Mouse" style using ocher paint. Probably anti vesicant paint. (National archives) 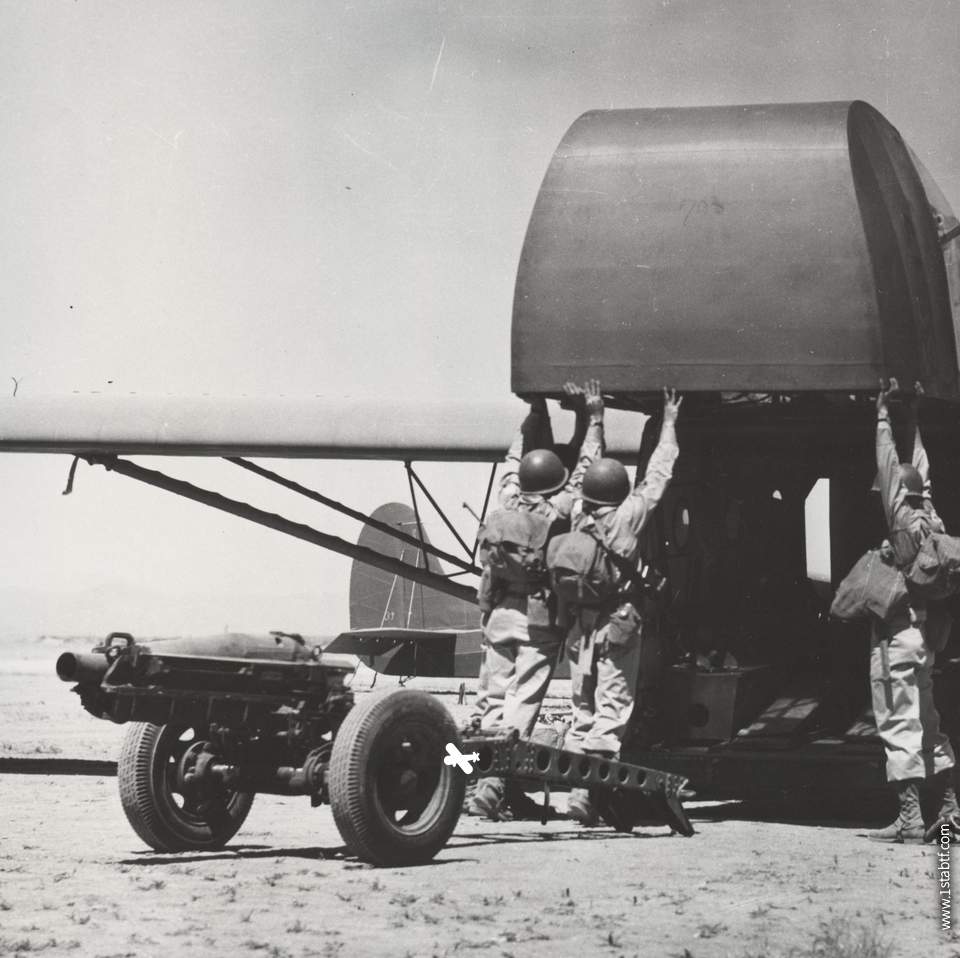 Unlike the 320th GFAB, the 319th GFAB, which is also part of the 82nd Airborne Division, was organized into three batteries, each with four 75mm pack howitzers. (National archives) 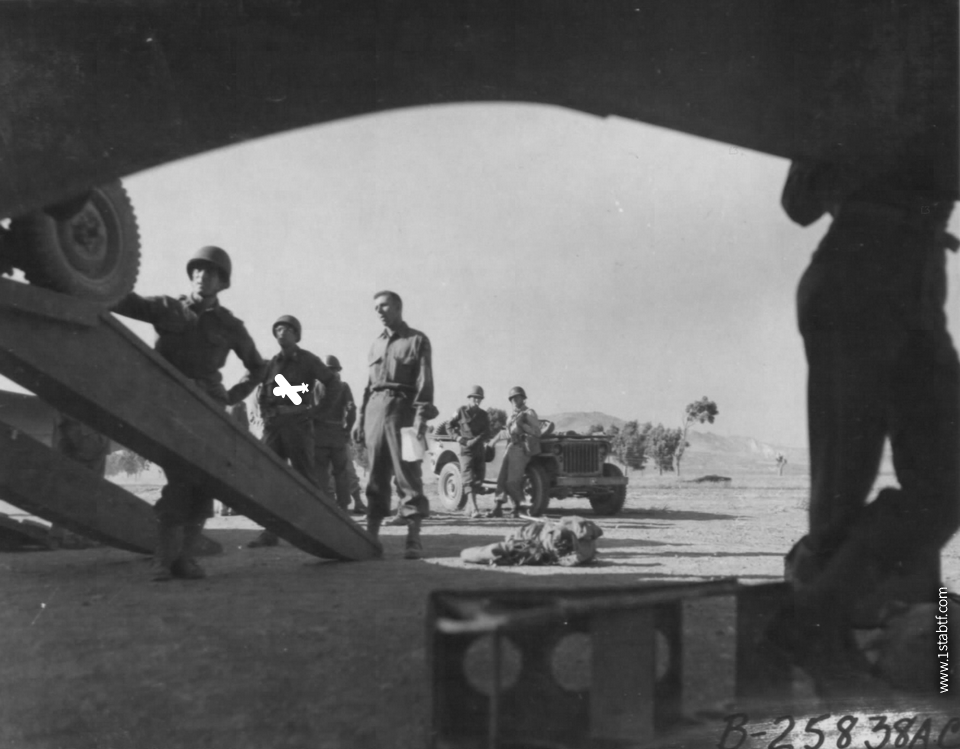 The 80th Airborne Anti-Aircraft (80th AAA) Battalion, commanded by Lt. Col. Jack Whitfield, was composed of a HQ unit, a medical detachment and 6 batteries of about 80 men each: The “A”, “B” and “C”: as anti-tank company with each 8 guns of 37mm later replaced by 57mm guns more easily transportable by glider. The “D”, “E” et “F”: as anti-aircraft company with 1 machine-gun 50 caliber gone up on tripod M3 to support the infantry. (National archives) 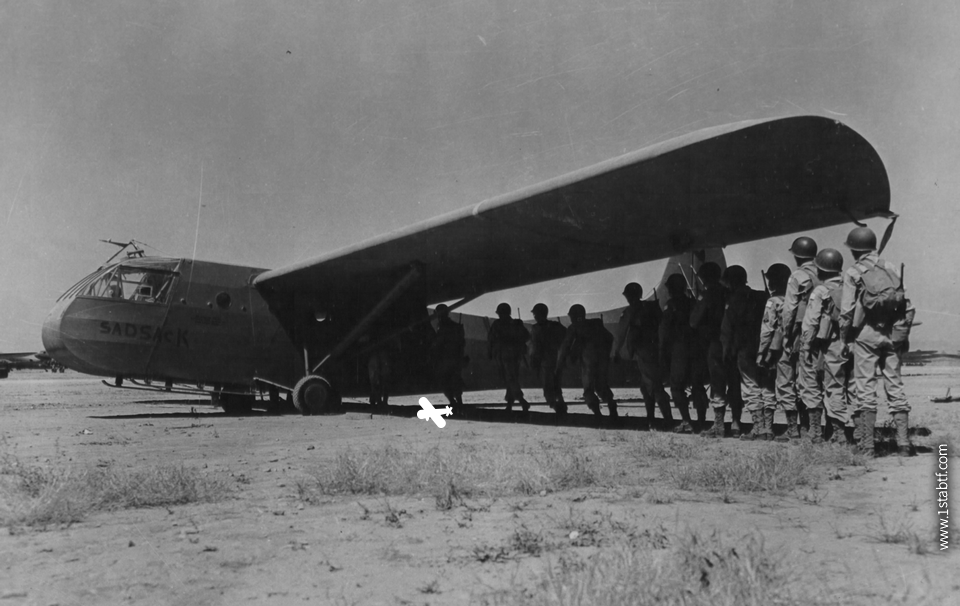 Glider Riders of the 319th GFAB during a glider training in North Africa. (National archives) 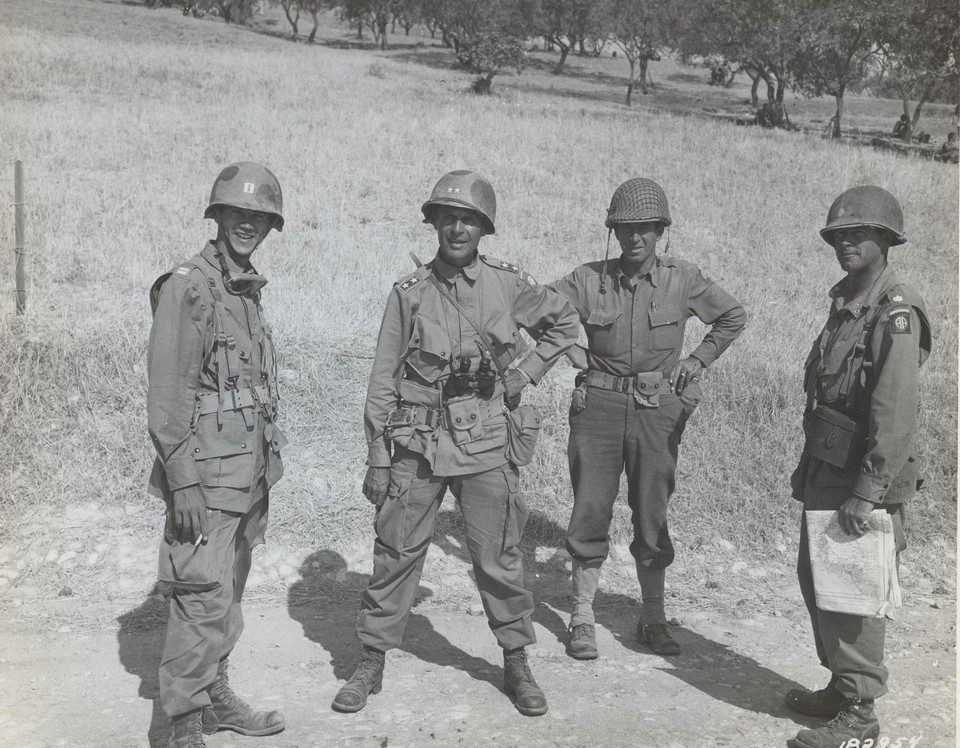 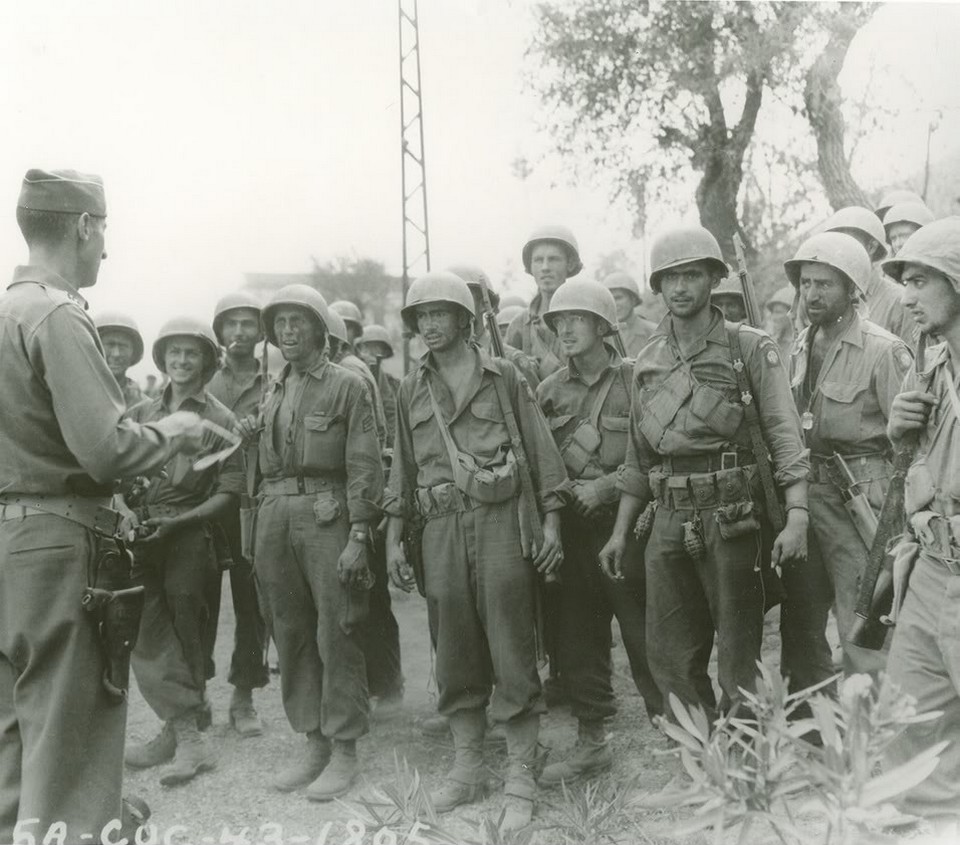 Glider Riders of the 325th Glider Infantry Regiment congratulated by General Mark Clark, 5th Army Commander avec the fighting on Chiunzi Pass. The 325th did not land by air, but by see. The first combat glider landing by the 325th will be in Normandy. (National archives) 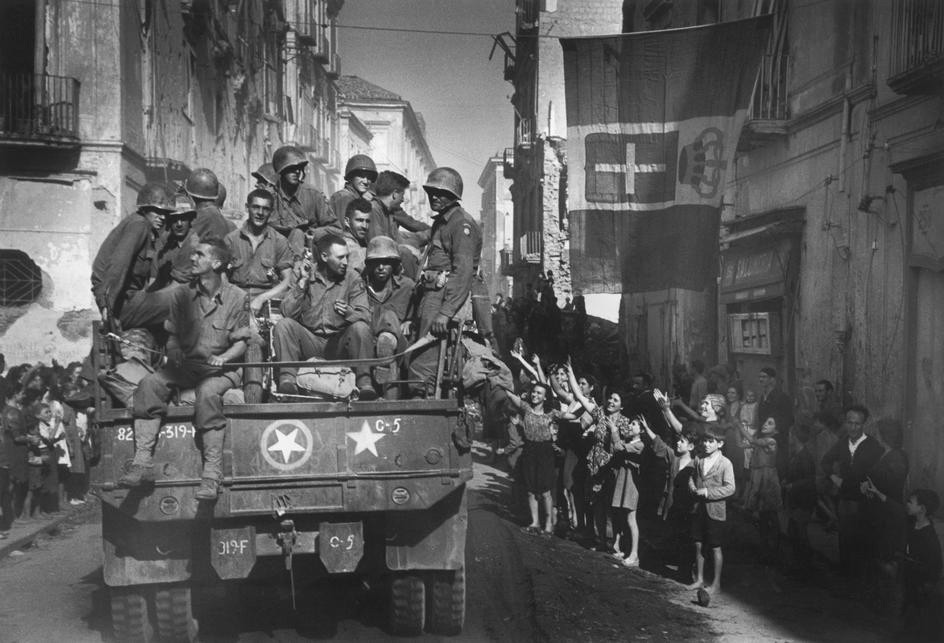 Glider troops of the 319th GFAB enter in Naples in October 1943. The 319th GFAB fought in Maiori with the Darby's Rangers during more than two weeks. (LIFE)

Glider troops of the 319th GFAB enter in Naples in October 1943. The 319th GFAB fought in Maiori with the Darby's Rangers during more than two weeks. (LIFE)

Gunners of the C Battery, 376th Parachute Field Artillery Battalion on the Winter Line. After the liberation of Naples, the 504th PIR & the 376th PFAB were detached from the 82nd Airborne temporarily and fought as "leg infantry" through the hills of southern Italy as part of the 36th Infantry Division. On October 29th they capture Gallo. They then battled in the Winter Line commencing with attacks up Hill 687 on December 15th, 1943. 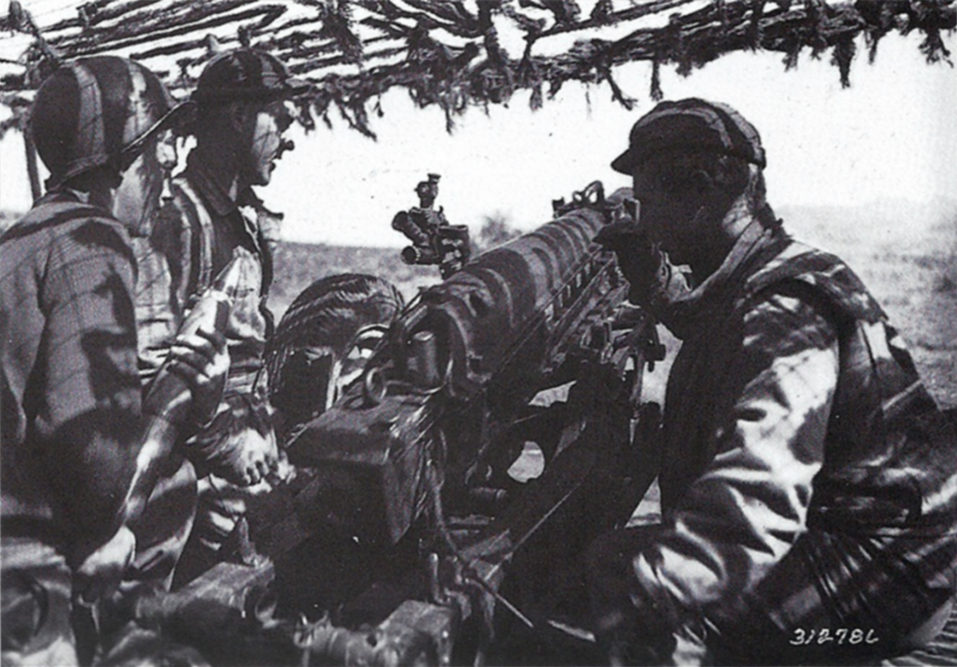 The 463rd PFAB is the airborne artillery battalion in support of the First Special Service Force. This picture was took on the Anzio beachhead at the spring of 1944. (National archives)