This photo taken by War Photographer George Silk is probably the best known of the battle of Cisterna di Latina. It is taken on May 25, 1944 in the center of the city, while the last pockets of German resistance are surrendered and the last snipers are eliminated.

Between 30 and 31 January 1944, the Darby’s Rangers of the 1st, 3rd and 4th Battalion of Col. William O. Darby fought in an unmatched fight at Cisterna, an important road junction for the capture of Rome. More than 700 Rangers will be taken prisoners and parade in Rome on 16 February 1944.

Four months later, after a similar World War I battle on the Anzio beachhead, Operation Buffalo is triggered and the race of Rome began on 23 May 1944. The 3rd Infantry Division is designated to capture Cisterna di Latina. The 7th Infantry Regiment is chosen to advance to the center of the offensive device on the locality supported by 751st Tank Battalion’ Sherman tanks, while the 15th IR is on the right flank and the 30th IR on the left flank. The Marnemen are also flanked on the right by the First Special Service Force and on the left by the 1st Armored Division.

On 25 May Cisterna was conquered, but the fighting really ended on the 26th around 4 pm, at the price of 1000 men on the side of the 3rd Infantry Division and about a hundred tanks of the 1st Armored Division. Tens of other tanks were eliminated by the Tigers of the Schwere-Panzer Abteilung 508 on the east flank.

This photo taken at the Mura della Porta Agrippina (Gateway Agrippina Wall) (whose road leads to Cori)) was to appear in the June 19, 1944 issue of LIFE Magazine without mention of any name. The sight of these photographs whose legend appears in the book From Fedala To Berchtesgaden (pp. 114-115): Lt. Henry S. Prario and T/Sgt Leroy E. Hamilton watch an unidentified Co. "C" soldier kill one of the last enemy snipers in the town, on 25 May 1944.

However, a controversy exists (and probably others) concerning the men present in this picture. Indeed, Earl Reitan veteran of the 7th IR having written Riflemen: on the cutting edge of World War Two designates these men as S/Sgt. Earl Swanson on the left and Pfc. Edward F. Tidd Jr. on the right watching at an unidentified man shooting. Earl Swanson will be promoted to the rank of Captain and Commander of the F Company and will be later killed at Utweiler in Germany on 15 March 1945.

Still later, James Smart of the G Company of the 7th IR would have identified himself shooting with his M1 rifle who could conclude that these men are part of the 2nd Battalion and not the 1st Battalion.

This story can be strangely thought of Robert Capa's picture "Face in the Surf" taken in Omaha Beach on June 6, 1944 when several veterans identified themselves as the man in the photo. 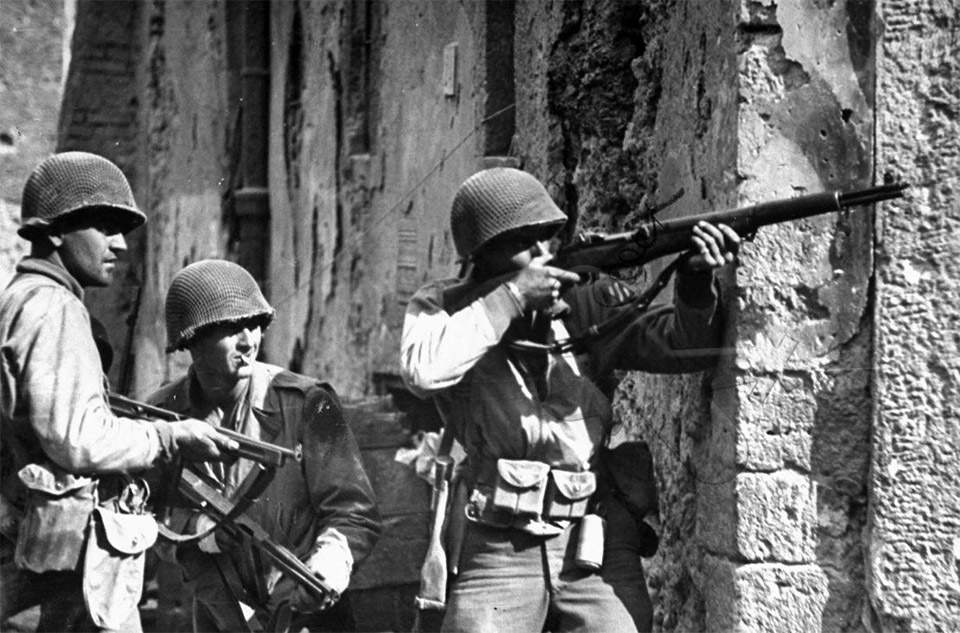